This article looks at a QROPS case example and examines the technical aspects of such a vehicle. A QROPS or Qualifying Recognised Overseas Pension Scheme is quite a mouthful but put simply it is a transfer of an individual pension fund from one country to another. EU legislation exists which enables these transfers, although individual countries can decide for themselves whether to allow them or not. 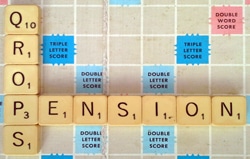 Currently, only the UK has completed the necessary local legislation to allow unfettered access to transfer, however in time I believe all countries will have to enact also. Clearly, it’s very important for anyone considering transferring their pension to be fully aware of how the legislation affects them personally, and I would always advise using the services of suitably qualified advisers to make the initial assessment.

A typical case study outlined below will show how a QROPS transfer from a UK pension can benefit those whose personal circumstances lend themselves best to take advantage of this relatively new legislation.

Silvia is a European national who has recently moved from the UK to the Netherlands. She worked for 20 years as an international lawyer for 4 different companies and intends to work in other EU countries before retiring in France. She has 4 pension pots from 4 different insurance companies, all of which are defined contribution schemes. Defined contribution simply means her pension entitlements are based on contributions from herself and her employer. These contributions are invested, and she will be able to take a pension based on annuity rates at her time of retirement. Annuity rates are calculated by insurance company specialists who work out Silvia’s expected lifespan then apply a percentage rate to the pot from which she can withdraw income. So, in the case of a 65-year-old for example, this rate would be around 4% per annum.

Silvia has around £400,000 in total and is not expecting to work in the UK again.

Although Silvia doesn’t expect to work in the UK again, Life Time Allowance (LTA) legislation means tax benefits are only allowable up to a maximum of £1.25m on current legislation. This means if she leaves her pension funds in the UK and they perform well (let’s say by 10% per annum), her £400,000 will soon exceed the LTA. Using the ‘rule of 7’ for simplicity, whereby the principle doubles every 7 years if increased by 10% compound interest per annum, it would only take about 10 years to reach her LTA. This means if she works in the UK again, she won’t be able to claim tax relief on pension contributions. She could even end up creating tax liabilities. Additionally, the LTA could well reduce in future years as we have seen the gradual erosion of the LTA from £1.8m to £1.5m to the current £1.25m.
10% per annum compound interest is a good return, however not impossible with the right investment portfolio. In Silvia’s case either she will reach her LTA too quickly or her funds have to perform badly to avoid this. Neither scenario is an attractive outcome.

Back to Silvia’s questions in the QROPS case. The answers I will give here are brief and it must be noted that behind most simple answers is a plethora of technicalities that would also need to be addressed and resolved.

Finally, although Silvia didn’t specifically ask about the Life Time Allowance legislation, her adviser has more good news as QROPS don’t impose LTA’s. So, rather than being penalised for good investment performance, Silvia will be rewarded as her pension can grow unrestricted, therefore making both her Pension Commencement Lump Sum and income higher.

The adviser’s job is to take care of all administration on Silvia’s QROPS case, provide the investment platform and tax advice and carefully look after her pension with future servicing.